Welcome to ZoomCaffe (A note from the founders.)

Good things take time. This is a universal truth. And it is especially so when beginning a voyage with this statement: We are going to do something that has never been done before. You look out at the proverbial white board. The blank sheet of paper. You can either panic or get excited and move.

We got very excited.

It was well over a year ago that our group, the founders of ZoomCaffe began to sketch out rough ideas of this new concept in bringing coffee to the public. We began this exploration in cafes. We sat. Watched. Listened. We continued them walking on streets of the Bay Area. Sat for hours in meeting rooms in endless discussions. We learned from those around us and from each other. Thoughts were refined into concepts as our team grew. Images emerged from this tabularasa as clarity revealed itself slowly over time. 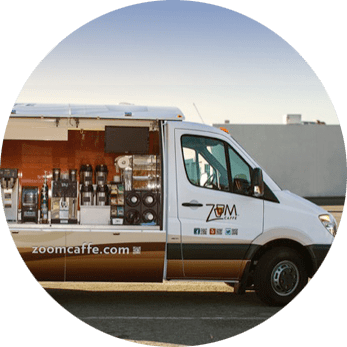 Just as the physical shape of ZoomCaffe emerged a set of shared values did. Values that guide us and that we did not waver from. They are:

Quality. We will not sacrifice quality.
Convenience. Our results must be convenient to the consumer.
Community. ZoomCaffe will become a part of the community that it serves.

Our team took shape. Leading industrial and graphic designers. Experts from the worlds of coffee, mechanical and metal fabrication and computer systems. And now over a year later our idea, this concept is hitting the streets of the San Francisco Bay Area. This ZoomCaffe.

So what did we create? Just what is ZoomCaffe?

At its essence, ZoomCaffe is an artisinal quality mobile cafe. Delicious coffee that comes to you.

Yet Zoomcaffe is more than cafe on wheels. It is a marriage of the best of old world and new. Old world brewing techniques that emphasize flavor and freshness made more consistent by new world technologies. The latest computer systems that help you to find your ZoomCaffe, order quickly efficiently and be on your way.

And finally, but not in any way the least, ZoomCaffe is you, our customers. We believe in your participation in the creation of a new way to enjoy one of the oldest beverages in the world.

More on that in our next blog. See you on the streets.